6ix9ine Claims To Have The Best Chains In The Music Industry 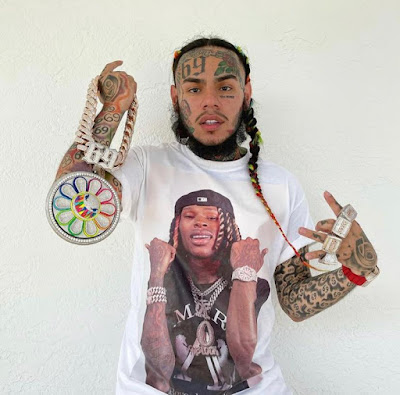 With his recent return, 6ix9ine has caused a lot of controversy in social media, being one of the controversial facts in the question of the rivalry that the artist has with some gangs, he has turned the media into a rivalry space caused by controversies; after bullying Rapper Meek Mill on his new song "ZAZA" in which 6ix9ine was striving to remove the controversial part of the artist;

After that 6ix9ine made a live some days back, talking about other rappers, Although rapper was threatened with death on his own live, having many indirect words, However, even so the artist has not stopped showing that he is back in the game, shown to his fans who spent more than 1 million dollars on a biggest Jewelry Chain, saying that "He got the best Chain in the rap game" discriminated against other rappers who have the smallest chain, which is considered to him as "Little Niggas", in the meanwhile ,6ix9ine has put more controversy on social platforms saying that "There are things that we don't agree with but there is one thing that we can agree on is that I have a better chain in the music industry, if you don't agree, I hate you;"

Seeing that Takashi is spending his money on jewelry, seeing that he is being hated by most of the media for the things he is doing in recent days; 6ix9ine again shares one of his new "Water Parks" chain in which he is covered in diamonds, the rapper again claims that "he has the best chain in the rap game;" Water Parks "chain cost over 1 million dollars, The rapper describes in the description "Best Chain In The F * cking Game, It's Cool To Hate Me, But I Knoww My Chain Spit out Water Y'all niggas is little niggas, 1,000,000 Dollar Chain And Better !!! S ** ck My D ** k .."
we don't even know when the 6ix9ine madness will finish it, being one of the rappers most hated in the rap game... But Check It Out