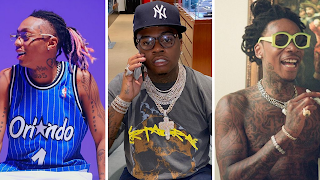 After the success of the hit "Tommy Lee" featuring Post Malone that entered on Billboard Hot 100 in june , the rapper decided to bring something new to his fans, he prepared his new Single called as "All The Smoke" with participation of Gunna & Wiz Khaliza; Tyla also announces on his Instagram the official video will be dropped on 01.08.21;

Before his new single ,Tyla came up with Remix of the hit "Stuntin' On You" that had been released before with Dababy, now the rapper started spread more his song to the world ,so he came up with DDG and Dame D.O.L.L.A to help him with the Remix ;Tyla Yaweh has been working hard on his career since when Tyla released "High Righ Now" that pushed him  forward ;

Check it Out the New song