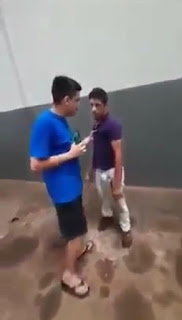 In this weekend has appeared a some video that certainly went viral on social that shows an attacker beating a man,inside a machine shop in Tangará da Serra - MT, 242 km from Cuiabá, to collect a debt of Rs 500. If it converts this money to Dollar it will be $97,64 that he owed him; But an aggressor was identified by the Civil Police as Gustavo Henrique Albanez. In the images,he appears drinking a beer and punches and slaps the victim so badly .And Eventually an aggressor breaks a bottle on the boy's head. Even Like that the victim wasn't reacting ; It Seems like The victim was feeling guilty in that situation ; But the Aggressor still beating him hardly because of $97,64 he owed him for 5 or 6 mouth according to the video; Even with Beats no reaction in part of the victim;

This crime took place on Thursday (3), but only reached the police on Saturday, after the images were shared in groups on the internet .The police still suspect that the aggressor and the person behind the camera have left the city .and recommend that they report to the police station as they run the risk of residents wanting to do justice with their hands, since the video had great repercussions on social networks.The victim has also been identified, but he is out of town, afraid of the protections he has suffered. Video showing offender beating man for $97,64 debt is investigated by police .