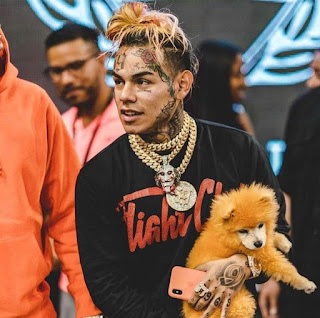 Before the announcement of his new album Tattle Tales ,6ix9ine came up to the streets hardly by releasing new track called as "GOOBA" that's broken Youtube's Record for the most watched rap video in a 24 hours ;Even Like that the Rapper wasn't stopped releasing songs ,some weeks later Tekashi 6ix9ine dropped new hit titled "TROLLZ" featuring Nicki Minaj ,The track pushed him forward at the top number 1 on Billboard Hot 100 ,That was considered his first Number One Song On Billboard Charts; Then The Rapper Released his Album Tattle Tales on September 4 ;

The Album wasn't a successful. So According to the Reports 6ix9ine was one the most Viewed Rapper in this year 2020, for having 2.3 Billion Video Views in the last 12 Months ,The Track "GOOBA" has Over 658 Million Views on YouTube following by "TROLLZ" that has over 314 Million Views And Others Hit like "YAYA" & "PUNANI" that contains a several views also ;

But 6ix9ine's not the only One ,Before him it is the rapper  NBA YoungBoy on 2nd Position he gets over 2.2 Billion Video Views on YouTube in just 12 months , Before YoungBoy ,It is  the extraordinary rapper Eminem on 3rd Position He has over 2 Billions Video Views on YouTube in 2020; However , Eminem is one of the old schools Rapper that is still hitting a lot of Younger Rapper in terms of YouTube Status;