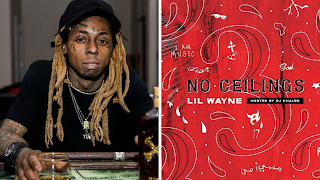 After In the last album Funeral, Lil Wayne decides to bring something different in this time by showing us an extraordinary Mixtape Called "NO CEILINGS 3" bringing with him a Canadian Rapper Drake to join on his mixtape by performing "BB kings Freestyle" that has been one of the best hit on his mixtape, on another page Lil Wayne brings up with him his own son known as  Karm Carter on his mixtape by performing "Karm" and also waynes came up with other Artist like Young Thug, Gudda Gudda, Vice Versa [Yaj and Poppyh], Lil Tune, Euro, HoodyBaby, Cory Gunz & Yd & Jay Jones;